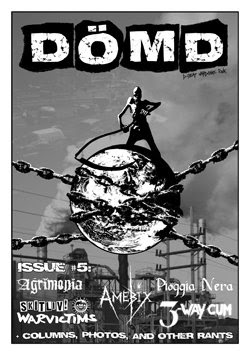 There's a big special about Skitliv!, Warvictims and D-takt & Råpunk in the latest issue of DÖMD #5. Me and my netfriend Krogh had a nice discussion through mail that he decided to translate into english. The zine is one of the best zines up to date from Sweden, interesting interviews/columns and great layout!

Here you have a short sample of the text:
"No matter what I’ve thought about Skitliv! in the beginning, the middle, or at the end of its existence, before or after I knew you were one of the people behind it, it brought this discussion to life which is one of the more interesting, punk related, ones I’ve had in a long time. Most of the time it’s so damn black and white, “you’re either with us or against us”, but this time it’s different. You’ve created something that I didn’t like at all, then just didn’t bother with, to finding out what it was all about and then it got interesting. I had to ask myself if this changed my view of you, the zine, your bands, the label… and if so, why? The biggest change was that I now fully understood that it was a big joke, even though I’ve figured as much from the very first issue. I didn’t know the reason behind it, but as I said earlier, I guessed boredom and provocation.

Either way, this time it’s not as black and white, this time we both share the same opinions even though we don’t agree on everything, and we can still discuss this without it affecting our friendship even though this only is a friendship based over the internet.

All of a sudden the “online punk life” became similar to real life and it wasn’t the “message board syndrome” where you either hate someone/a band/a label, or hate the ones who hate said person/persons.

It would’ve been easy for both of us to just tell the other to fuck off and then go about our own business, probably never running into each other in real life, having to deal with this again. But despite my comments on the zine and some stress caused by my Warvictims review, we remain friends.

What you write here is interesting, so now that you have gone from getting annoyed to not caring to asking yourself if my involvement has changed your view in any way… has it?

The main reason for starting the zine was of course to have fun and to finally get a zine together – something I’d been trying to do for years but never succeeded. Then it was to provoke more or less the entire punk scene. People are constantly pointing fingers my direction due to, as I see it, faulty information and lack of facts. There are so many rumours about me on the net it’s fucking scary! At first I felt bad about this, but my real friends kept reminding me that they who knew me knew I wasn’t like the “keyboard tough guys” claimed and that the best thing to do was to not care about what they wrote. I mean, half the people who “know” all this stuff about me haven’t even met me in real life!

As I said, the faulty image of me I think is mostly due to shit talking on the web. And this does not only apply to me, but I’ve talked to other people who’s gotten a fair share of shit talk and lies aimed at them as well. People talk about me like they know me, like they know me as a person. They discuss what clothes I wear, what strange bands (mainly hip hop) that I listen to, and that I’ve sold out my punk ideals. What the fuck do they know? The real funny thing in all this is that some of the people who throw shit at me on various communities and such at the same time order records and merch and suck up to me. I’m quite sure there’s a suiting word for this – hypocrite!

Another thing I feel I have to comment on as well is the fact that you found it unfortunate to get Skitliv! and Warvictims connected. You’ll have to excuse me, but is that so strange? I mean, during the time the lie was alive it was in fact “Challe” and “Fisen” who wrote the zine AND played in the band, it wasn’t “Challe” and “Fisen” who wrote the zine and Jocke and Sylen who did the music. One year ago it wasn’t very strange to draw comparisons between the zine and the band, while it’s not the same thing today. For us who didn’t know the truth “Challe” and “Fisen” were very much real people, involved in both projects, there were no difference between the two at that time.

I see a big difference between Skitliv! and Warvictims. Mainly the fact that Warvictims are for real where Skivliv! was a big joke from day one. The choice to write the zine in Swedish also excluded everyone not from Scandinavia. I didn’t want the zine to spread outside the borders of Sweden, while I want Warvictims to reach out to every corner of the world. And I don’t think it’s right to throw crap at Warvictims because there were two people doing the zine, and five people in the band. What we said in the zine shouldn’t cast a shadow over the other members of the band.

On a side note I got a mail a couple of days ago from a so called “anti PC” punk who wrote that he really had to sit down and think after the last issue of Skitliv! came out, and after reading what we put on our blog. He also wrote that he’s not dumber than to realize that it’s not cool to be an alcoholic and drug dependent, and that he had planned to be sober all weekend even though many of his friends were asking why. He just didn’t feel like it, but instead he wanted to get started on a zine. It may be the youth centre manager in me that got a tear in his eye, but damn it was great to get a mail like that! I don’t know exactly what it was that made him re-consider his choices, but this was part of what we had hoped to achieve with the zine!"
Posted by D-takt & Råpunk at 11:30 AM