15 years of Do-It-Yourself, distortion and non-conformity 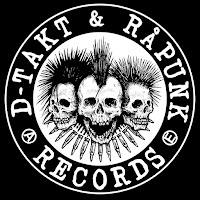 It all started as a joke with Skitliv! and the two fictional characters "Fisen" & "Challe", and their band Warvictims. During the work with the fanzine and the band (studio project), the seed was sown to start a label.

Here we are now, 15 years and 144 releases later. Who would've thought? We've had the honor of working with some of the very best people this scene has to offer. You feel humble when you actually look at the list of all the bands that have given us their trust. Obviously we have to give a major shout out to everyone who has supported us during all these years as well. It is and has always been highly appreciated. Likewise, all the dedicated souls who run a distro/label or record store around the world who have taken in and distributed our releases. Cheers to each and every one of you! None mentioned, none forgotten.

We had great plans to put on a 2-day festival and invite as many bands as possible to play live. But we all know what the situation has been, and still is. So we'll save it for another time. In any case, we got the annual tote bag printed. Hurray! Free with orders over 500sek or 75sek/each. dbeatrawpunk@gmail.com

Unfortunately, the development in the vinyl industry, and everything that goes with releasing records, is going partly in the wrong direction. Pressing plants has a 6-10 months turnaround and on top of that, you are often met with lack of service, high prices and cheap quality. Not in all cases though. The logistics and postal service also gets worse and more expensive for each year. It's more of a rule than an exception with damaged (and lost) packages and items are constantly returned to the sender for unexplained reasons. Customs seizes a lot and imposes outrageous administrative fees, as if the shipping rates were not already enough. It makes one question how long you actually have the strength to continue and feel motivated and inspired by what you do.

Don't get me wrong, this punk scene and our independent international network of friends and contacts is still a force to be reckoned with. I got to feel it's true power and solidarity in connection with the flood in 2014. People's generosity, thoughts of strength and fundraising are something I carry with me every day. D&R have some already planned releases for 2022, so it's not over just yet.

Cheers to 15 years of Do-It-Yourself, distortion and non-conformity. D-beat raw punk or nothing!