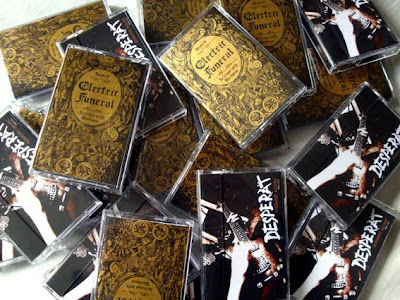 Because of the delayed 12" we decided to D.I.O (do it ourselves)
and made a limited tape version of the first Desperat recording that Mob 47 will bring on their US tour in november. Some swedish friends questioned why only the yankees was able to buy it. So then we decided to make some more copies so that everyone have the same change to get it. No mass production on this one. The tape include 7 tracks, at least two of the songs will not be found on 12".

We also finally got the new Electric Funeral tape in stock. Cover and inlay are printed on gold paper, limited to 40 handnumbered copies. This tape is a collaboration between EF, Nils/Dispose (sweden), Fofäo/Besthöven (brazil), Dimitris/Go Filth Go (greece) and Foat/Fear Of Tomorrow (canada). They all helped out with one lyric each. A worldwide network of punx. 4 tracks of d-beat noise attack. See our Wordpress, discography section, for further info.