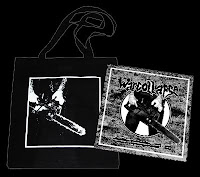 Just read at Blindead's web that the Warcollapse 12" ain't far away now. Who the hell don't wanna have their own War-bag?

"It's been forever in the making, but today the testpressings were approved and the record is in production. Planned release: March 4

This is the follow-up to the 2003 cover 7" on First Blood Family. This time around the band has set their aim for the 80's Nordic scene and have taken on one track each from Missbrukarna, Bannlyst, War of Destruction, Rattus and Purrkur Pillnikk and put them through the crust as fuck filter that is the Warcollapse sound.

This 12" will be released in a total of 500 initial copies with 50 limited pre-order editions that comes with a screen printed canvas bag. This limited version costs 20 SEK more than the regular version".
Posted by D-takt & Råpunk at 2:32 PM