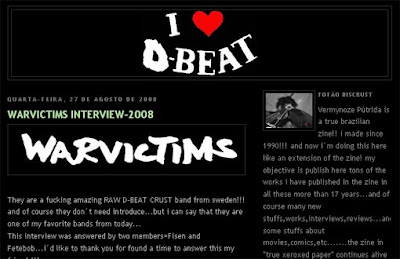 1. TELL US A LITTLE ABOUT YOUR HISTORY...WHEN FORMED...ETC..
Fisen: I think it was the summer of 2006, perhaps june/july? Me and Challe had played in bands together before Warvictims so we have known each other for a long time. Both of us are into rawpunk and d-beat a la 90 styles, you know what I mean? We have been talking for a while that we should start a new band with no bullshit melodies on the guitars. Just to keep it simple, tedious and raw with lyrics only about war, starvation and death. We recorded our first rehearsal and that was later released as the minicd “when the innocent cry”. Only 100copies made and it was included as a free record with our zine Skitliv! #3. I think that’s for the best. Back then I played the drums and I really suck at it.

2. WHY "WARVICTIMS"???
Fisen: We wanted a standard name and war and innocent victims is a common topic among punk bands so we just putted together those words.

3. WHAT IS YOUR OPINION ABOUT "DISCORE"..."CRUST"...ETC...ONE TIME THAT WE CAN SEE/HEAR LOTS OF PEOPLES TALKING SHIT ABOUT THAT...AGAINST THAT TOO...ETC...
Fisen: For me it’s either punk, råpunk or käng. Today there are so many names for the same music (in my ears), why make it more difficult then it is? I saw some youtube movies some weeks ago about the war between crustpunks and trallpunks here in Sweden. I did not even know that there was a war going on. I have never been involved in this conflict and I will never be a part of it. I think it’s pretty ridiculous. In my point of view the punk scene has always been divided, I ask myself for what reason? Punks should just unite and fight back the true evil in the system. We should not try to be some fucking hip hop scene with beefs and shit, we should know better then that. Internet is good for many reasons like finding information, meting new friends/bands etc. But there are also lots of dark sides as well. Like backstabbing and bullshit talking punks on forums and such. Let’s say that Warvictims got ripped off by some label. Then that’s in between the band and the label not hundred of other punks with lack of information about the story between the two parts. I see this often in Sweden with punks defame other punks cause of some bullshit rumours on the net. Mind your own business!

4. YOU ARE A "YOUNG" BAND...SINCE YOU ARE FORMED IN 2006....BUT YOUR DISCOGRAPHY HAVE GROWNING MANY MANY FAST...BEYOND YOUR DISCOGRAPHY...WHAT ARE THE NEXT PLANES??? NEW RECORDS,ETC...
Fisen: We’re a young band with a bunch of old farts. Hehe. We have access to a studio where we can record most of the stuff almost for free. So as soon as we have any new tracks we just hit the studio. We don’t have any future plans as it is today. We have recorded four tracks that will be released by Abuse Records from Belgium. That might be our last record. It’s too early to say anything more.

5. WHAT ABOUT YOUR TOUR?? IT WAS CANCELLED???
Fisen: Yes, unfortunately. Challe (vocals) have been depressed for some time now and he just felt that he couldn’t go on tour. He thought that the anxiety just would increase. It’s a damn shame, but we all have to respect his decision. We were all really looking forward to this tour. We were supposed to play at some great venues/festivals with several of good bands. Fuck, it just makes me depressed to think about all this. I/we wanna apologies to everybody for this inconvenient with such short notice. Read more about it on our myspace profile with a personal letter from Challe with more details and a blog post from the band.

6. WHAT IS YOUR CURRENT LINE UP??? MANY CHANGES SINCE THE BEGUIN??
Fisen: We don’t know the current line-up cause we haven’t been talking too much to each other after we cancelled the tour. Challe don’t wanna play live but the rest of us want. He might be up for 1-2 shows at top and we wanna be out for at least 1-2 weeks at the time. Perhaps we will continue as a boring studio project or perhaps we’ll find someone that can replace Challe or perhaps we just quit the band and move on. As I said we haven’t really talked about it. It’s only me and Challe who’s been in the band since the start so there have been some major changes through the years.

7. SAY SOME OF YOUR FAVORITE BANDS...AND INFLUENCES???
Fisen: It’s actually really hard to say, I’m influenced by so many bands. Dischange/Meanwhile, Disfear, Warcry, Consume, Disclose…to namedrop a few. When I grew up I more or less only listen to bands that started with DIS, which might reflect some of the chords and songs I do today.
Fetebob: You could say the whole lifestyle and enviorment within the ranks that we hang out in is our influences.. a hard living contributes to what we do.. band i like is Disaster, doom, warcollapse and the english anarchopunkscene in the eighties. They lived what they believed in, so shall we.

8. HOW ARE THE SCENE IN SWEDISH TODAY??? GIGS, ZINES, ETC...
Fisen: I think that there are lots of new great bands, like it always been. In some way it feels like the scene is growing more and more with young and hungry punks that want things to happen. When it comes to gigs/venues we have “Spatt” in Göteborg, “Skylten” in Linköping, “Verket” in Umeå, “Fullersta” in Stockholm and some other small venues whose organise shows and workshops. We have “Punk illegal” (located in Göteborg) who arrange shows/festivals for the benefits of illegal immigrants. There ain’t that many active papers zines around today which I think is very sad. Internet is taking over more and more with blogs and such.
Fetebob: We have venues but there should be more and it should be alot more discussions about the current situation in the country and how to widen the spectra on teh scene.. like it is now everybody is so segregated and pointing fingers at eachother. I guess every country has problems with the hierarchy and elitethinking. Fuck all that and start communicating and be a threat for real.

9. YOUR MEMBERS ARE PLAYING IN OTHER BANDS/PROJECTS...???
Fisen: Yes everybody in Warvictims has played and plays in other bands/projects. Just leave it as that.
Fetebob: Yes we play in alot of bands but theyare not interesting now.

10. TELL US ABOUT YOUR OTHERS WORKS...LIKE YOUR AMAZING LABEL...HOW IT ARE GOING...AND HOW ARE THE NEWS...
Fisen: I started D-takt & Råpunk some year ago with no expectation that it would turn out like it did. When we started Warvictims nobody wanted to release our first recordings so we just decided to release it by ourselves. There where also a lot of other great bands out there that we wanted to release. So that’s why we started D-takt & Råpunk Records. So far I think that we have released some fucking amazing records like with bands like; Mob 47, Nuclear Death Terror, Giftgasattack, Tortyr, Dissober, Besthöven etc. It was a true honour to release the Mob 47 lp/cd. I have listened to them since 92 and I would never have thought that I someday would release a record with them. We always got lots of pre-orders so most of the records get soldout really fast, which we think is great cause then we can put the money into a new release. Hehe. Yesterday I sent two new releases to the pressing plant; Flyblown/Warvictims split 12” and Raw Hate 7”. I hope they will be out in september. After those two we will release 7” with Krossa and Spritvev, 12” with Giftgasattack, cassette with Kirai and a Skitliv! compilation cd/lp. More to come…

11. I..D LIKE TO KNOW MORE TOO ABOUT SKITLIV ZINE!! ARE ALL MEMBERS OF WARVICTIMS WORKING ON THE ZINE...OR IS IT JUST A "ONE MAN" WORKING AT...???
Fisen: This is how it is; me and Challe started the zine Skitliv! by the end of 2005. It’s a true old school cut and paste raw punk zine heavily influenced by another Swedish zine called Sika Äpärä (rip). At the beginning me and Challe did most of the zine related work together. Today I do most of it all by my self. Claude has been helping out the last issues with reviews and reports. Challe is still a part of the zine. He’s helping out with everything he has the energy to. We will put out one more final number (#10) and after that we won’t do any more zine. It’s fun doing a zine, but it takes to much time.

12. TOP 10 (CRUST/D-BEAT AND DISCORE ONLY)!!!
Fisen: Fuck, I hate top lists just casue it’s so hard and you always forget something. If you would ask me next week or next month I would probably say other records. But here it goes:

13. WHAT ABOUT THE OLD SWEDISH BANDS LIKE BOMBANFALL OR FEAR OF WAR...WE NEVER HEAR MANY THINGS ABOUT THEM...
Fisen: It’s two awesome bands so I don’t know why we don’t hear so much about them. I don’t have any records with them, just some songs at my mp3 player. The records are hard to find and costs way too much. Have you heard Disfears cover of Bombanfalls “Hälsning från helvete”?

14. WHAT YOU FEEL WHEN YOU HEAR NEWS ABOUT THE CURRENT "WAR CRISIS" IN GEORGIA????....WAR IS THE REASON TO STOP THE HUMAN MADNES FOREVER???
Fisen: Don’t know what to say, it’s very sad. I feel so powerless when it comes to topics like this. We have no speech among the great masses. Our words and protests ain’t worth shit. The government and the police cover up for the leaders in this fucked up corrupted system. As long as there will be greed around the globe there will forever be wars. History repeats it self, when will the leaders ever learn?

15. AND...FINAL WORDS....FEEL FREE TO TALK SHIT...HAHA...
Fisen: Thanks for the interview bro! Take care and good luck with Besthöven in the future. Don’t let the system grind you down. D-beat will never die! Horns up.
Fetebob: Thanx for interest in warvictims.. if we could get our shit together maybe we can come over and play some shows with Besthöven. Up the fucking punx!!!
Posted by D-takt & Råpunk at 6:37 PM