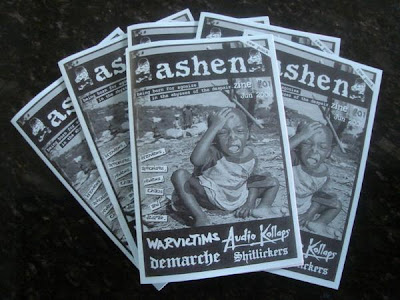 1 – Although the band is identified with the raw punk d-beat (logo, lyric themes and beat), your music sounds quite different from all common dis-bands. That makes the Warvictims´s sound something very particular. What do you think about it? The purpose has always been making of its way, developing an own style?
- You think so? Hmm. I don't think that we have any unique sound, in my ears its just the same old tunes reusing once again. So it isn't something we have planned or anything, our sound just turned out this way. And if you listen to some of our records, we sound a bit different on every one of them.

2 – Some band´s members live in different cities. With what frequency you meet yourselves for rehearse and get drunk?
- As often as possible. Fisen and Challe live in the same city, which we're have the rehearsal place and the studio that we are using. Once in a while Chackas pay us a visit and we'll rehearse and if we're in the mood we record some tracks. Sometimes some firend help us out if some of the original bandmembers haven't the time to record/play live. Sure it would be fun to get together more often, but the situation works as it is too.

3 – This distance is also an obstacle to make more gigs and/or to tour?
- It is, we have tried to get a tour together for almost a year now, but this fall it seems like we finally we'll arrange this. It's not much you can do about the situation unfortunetly.

4 – How are the current line-up? How long you are together?
- Challe: Vocals, Fisen: Bass/vocals, Fete-Bob: Guitars/vocals, Chackas: Drums. Challe, Fisen and Chackas have been playing for some years. We have had five different drummers cause Chackas can have some problems to take free time of from his studies.

5 – The Warvictims is a relatively new band. Since when are you involved in the punk scene? What is the history of each member on the scene? Bands, labels, zines, etc..?
- Everybody have been involved in the scene for some years before we got together and started Warvictims. We have all been involved in other bands, some of us have released records and some have done other zines before, but it feels unnecessary to waste time talking about the past…

6 – You have created a new label called D-takt & Råpunk Records. How are the activities until then? There is a lot of difficulty to release new stuffs? What's new for 2008?
- We have a great network with friends/labels/distros worldwide so we sell 300-500 records quite fast. When a record is sold out we just use the money to press new radical records. First out is the split 12" with Giftgasattack/Mardröm. We have also sent Dissober 7" and Mareridt 7" to the pressing plant. We have a lot of more plans, but nothing 100% so we won't talk about it until everything is certain. You just have to wait and see :)

7 – The label is receiving stuff from bands interested? What is the profile of band that can send stuff to you?
- All kinds of d-beat, rawpunk, crust. As long as we like what we hear. Please send us your records! We have talked about releasing a compilation lp with new great bands from all over the globe. But so far we only have 3-5 bands in mind, so we're up for new bands!

8 – You also have the Skitliv! zine dedicated to the Swedish punk. Write it in Swedish is not something restrictive, as there´re so many maniacal people for Scandinavian hardcore punk, as me, that would like to read the Skitliv!?
- Skitliv! is a rawpunk zine, the languish we use in Skitliv! would be very hard to translate into English, cause we use a lot of slang and typical Swedish expressions. Also our English is too bad, it's really hard to express yourself in a different languish. We have focused on Swedish bands because there is so many great bands from here, and like we said easier to write questions to.

9 – What band´s members are directly involved with the label and zine?
- Challe and Fisen are doing the zine with some help from a lot of friends. Fisen take cares of the label more or less by him self. But Challe will be more active in the future maybe. He's a lazy bum.

10 – What are your favourite bands and releases, past and present?
Fisen: Mob 47 – Garanterat Mangel, Dischange – Seeing Feeling Bleeding and Disfear – A brutal sight of war are three records that have meant a lot to me. I have a lot of other favorite bands to.
Challe: Hmm, hard to say… Disfear - Religion 7", Bombanfall 7" and maybe Disrupt – Unrest cd…

11 – What you have listen of music, lately? Bands, kinds, styles, etc…?
Fisen: The last couple of month I have only listen to old school bands like: Totalitär, Anti Cimex, Mob 47, Discard, Shitlickers. But also a lot of old hardrock bands like: Ac/Dc, Deep Purple, Black Sabbath, Iron Maiden.
Challe: I have too listened to a lot of AC/DC lately… and then I've listened to Neurosis pretty much.

12 – Almost everybody who likes raw punk loves old Discharge. In despite to like of Discharge and be a d-beat maniac, I am not a big fan of them. I prefer more modern bands as Disclose, Discard, Disfear and Dispense, to name a few. What do you think about it and about the dis-bands wave that continues until today?
- We can only agree with you! We have never liked Discharge that much and we really hate when people say that our music reminds of Discharge style d-beat. There are a lot of other bands that are both faster and rawer than Discharge. We really loved the Dis-band wave in the 90's and don't think that any of the bands you mentioned sounds that much like Discharge. Sure, they have maybe been influenced by their style, but they have done it so much better. Fisen saw them live last summer and they really sucked!

13 – The Swedish punk scene always has been a worldwide reference for all us since the beginning. How do you see the Swedish punk scene today? What's happening now?
- We know, Sweden have all the best bands. Haha. No, but it's true, we have a lot of great bands, we can not deny that. In our punk/crust record collections we would say that there is 65% Swedish hardcore. Don't know so much what's happening right, but there are lots of good new bands thrashing it up over here.

14 – What more current Swedish bands and/or releases do you recommend to our readers?
- Kvoteringen, Tortyr and Giftgasattack is three bands that I really like! Check them out if you haven't heard about them before. And the new Meanwhile LP maybe is out now? I'm sure that one kicks ass. Oh and by the way, Warcollapse latest album is great too.

15 – What your favourite foods and drinks? What do you, guys, like to eat and drink?
Fisen: I like to eat sushi, chicken and spicy food. And to drink I like ice cold water/beer and milk.
Challe: I'm a vegetarian, but I guess vegetarian tacos or maybe pizza is my favorite food. When it comes to drinking. With alcohol: beer and red wine, non alcoholic: Dr pepper or juice.

16 – How Warvictims´s members living in Sweden? What you make in day-by-day, out of punk scene? Studing, working, contemplating this failed world, etc.??
- Some of us are study, some work and some are sick-listed.

17 - Though young, the band has already released several EPs, some Splits and now an LP, in the period of only 2 years. How is the composition process of the musics and lyrics of Warvictims? Everybody contribute or some members are more active than others?
- Fisen do all the music except for the last recording where Fete-Bob helped out and did some songs. It was his first recording and we would guess that we will do more songs now when his in the band. Challe do all the lyrics, but Fisen have done a couple of them. So you can say Fisen and Challe are the core of the band in a way.

18 – I think that the band already have enough stuff to make big tours for the whole world. There is something planned for 2008? When the Warvictims be on the road and where?
- We are planning to do a 2-3 weeks tour through Europe in aug/sep this year. We have some shows/festivals booked already. It will be shit loads of fun! The only problem when you have so many songs is that it's hard to choose wich ones you wanna play live!

19 – Well, thank you very very much for the support guys. Any last words, comments, etc? Feel totally free !!!
- Nice interview, not just the same old questions as always. Hehe. Keep up the good work, the scene needs more zines and more unity. Fight back the system, d-beat punx will never die! If anyone wanna get in touch with us, please, feel free to mail us at: skitliv666@gmail.com or check out our myspace site if you wanna hear some blasting d-beat mayhem: www.myspace.com/warvictims We love to talk to new interesting people around the world. That's it, thanks for your support and your time. Over and out. Cheers! //Warre