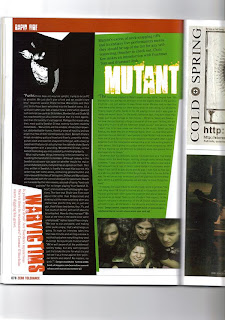 1. It seems that your newer stuff sounds a lot more raw and blown out than the first recordings?
- When we did the first recording we were really fucked-up. We had way to many beers and the recording was not planned at all. We even did some of the songs in the studio. Besides that it was Fisen who handled the drums and now we have a real warmachine pounding the d-beat! When we started Warvictims no one barley knew how to play, you could say that we have learned along the way, maybe that’s why?!

2. What do the band members do in their lives? School, work, money? How do you get the time to write and record so much music when you all live in separate cities?
- Some of the member’s study, some are trying to get jobs and some are living on social welfare. For most of the time Challe, Fisen and Eddie living in the same city. And when we have some new songs we just call up our drummer and we rehearsing for a week or two before we enter the studio. We have all the time in the world, since we’re unemployed. The only thing that’s taking up our time is when we’re doing a new issue of Skitliv! zine and when we are out drinking.

3. Everybody I've talked to from the Swedish raw punk & crust scene has a different theory about the band & whether it's for real or just an overly elaborate joke. If it's not true, then why does everyone think this?
- There are so many rumours about Warvictims/Skitliv! that it’s ridicules and we’re fed up with all the bullshit! The band and the zine are two completely different things. The zine is more about getting drunk and come up with as stupid questions as possible and Warvictims is way more serious. So to answer your question, we are a real band in real flesh and blood.

4. How come you haven't played any live gigs, and that nobody seems to have ever met you guys? Especially because this style of music is very much based on the live environment experience?
- We have played one show so far at our rehearsal place, we started the band a year ago and so far we have focused on recording since we have had some problems with our drummer living in another town. So it’s hard to get any shows. And for the record we have actually mailed Punkfesten 8, Linköpings Hardcore Fest and some other venues, but they rejected us. Maybe we can play there next year. We were supposed to play at Café 44 when Terveet Kädet played a couple of month ago, but it was of such short notice and Fisen was out of town so we had to turn the offer down. Hope that Kenko will mail us again if there’s another show coming up. It seems like nobody have ever met us but we meet a lot of bands and punks involved in the scene all the time at shows, festivals, bars and such. Guess that they have been to drunk to remember..hehe

5. Your zine comes out with loads of really big issues all the time, how do you find the time to do so much?! Surely it must take a lot of time and effort?
- The zine is taking a lot of time that’s for sure! But what are you suppose to do when you don’t have anything to do on your spare time? We love to cut and paste and making other punx angry, that’s what keep us going. To make an interview takes less then two minutes and writing a review is not that hard when everything they send us is crap. The thing that’s taking time is the cut and paste-layout since we’re doing it all the old school way. On top of that some bands answer after 2-3 month (if we’re lucky) which quite annoying when you have all the other things done. If it wasn’t for that we could release even more issues a year.

6. I've read a lot of criticisms of your zines from other Swedish zines, and they content is defintely the complete oppositie of what most people involved in the Swedish DIY punk scene think is okay...why is this?
- I guess that they are all jealous and have no sense of humour. Punks these days are way to up-tight, trying to be as much pc as possible. We just don’t give a fuck and we couldn’t care less about all the negative criticism. At the same time there’s a lot more punks who give us positive feedback, which give us hope for today’s punkscene. We don’t wanna name drop bands or people but it’s a lot of well-known punk and hc bands who really enjoys the zine and always ask for upcoming issues. We’re well aware of all the problems of society today, but why can’t they just try to take the zine for what it is and not see it as a threat against their political beliefs and ideals.

7. What do you say to people who criticise you for what's in your zine?
- We are not forcing anyone to buy or read it. If you don’t like it, don’t buy it fucker!

8. How do you respond if someone says you're sexist for havin pictures of naked girls in your zine?
- We guess you’re referring to the poster in nr #5. It’s a montage of some well-known Swedish athletes, and we have no idea who has done the picture originally. We got it mailed from a friend and thought it was funny so we put it in the zine to see what kind of reactions we would get. As usual. Hehe.. No masters, no gods. Fuck sexism!
Posted by D-takt & Råpunk at 8:45 AM