Buy the new Damage album HERE, or hopefully I will get a few copies of the 12" in stock soon.
Posted by D-takt & Råpunk at 7:20 AM No comments: 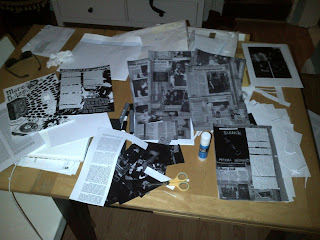 The initial idea for issue 9 was to include a collection of articles broadly covering “under-rated punk/hardcore scenes” (Norway, France and Poland was singled-out at first) but as always the zine actually turned out a quite different to what was planned. The finished fanzine contains short but sweet interviews with FUK, DISORDER and THE WANKYS, and I am sure you’ll agree that it is hilarious that these three bands are chosen to represent “current punk bands in England” (HAHA!). But more importantly there’s a lengthy article about, and interview with, forgotten UK 82 punk heroes STENCH by Rich ‘Militia’ Walker, telling the full uncensored scandalous story of the band along with tons of never-before seen photos. There’s also a story on IT BITES, which was the name of a series of random cassette tape compilations that pre-dates the modern KBD phenomena by compiling the rare, obscure and better-forgotten unsung heroes of shit punk. There is also a passionate love letter to the best GREEK CRUST records of all time, as well as an exclusive interview with Japanese oi/pogo punx THE BOLLOCKS. Finally, as always, expect bad grammer, crap layout, reader’s letters and pages upon pages of reviews of the latest in peripheral punk and hardcore that normal people don’t give a fuck about!  Oh and the cover of the zine is by TEODORO HERNANDEZ (Firmeza-10, OTAN etc). Let me know if you'd like to buy any copies of the fanzine and I’ll work out the costs.
Cheers/ Tony (slobodanburgher@gmail.com)

Interested in buying a copy or copies? Just send a mail to kgruenenfelder@hotmail.com 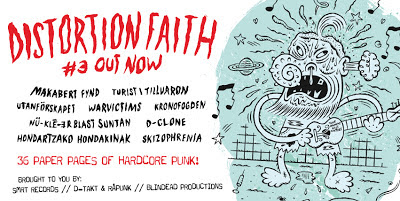 The third issue is here! 36 pages of hardcore punk, including interviews with Turist i Tillvaron, Kronofogden, Utanförskapet, Nü-kle-ar Blast Suntan, D-Clone, Skizophrenia and Hondartzako Hondakinak. But wait, there's more... A Makabert Fynd tour diary from their August 2012 trip, an August 2012 studio diary from Warvictims, some additional writings and a couple of photo pages courtesy of Chris Agitate. And let's not forget the cool drawn cover made by Ruben of Svart Städhjälp. A mighty fine issue if we may say so ourselves. 10sek + postage.
Posted by D-takt & Råpunk at 12:48 AM 2 comments: 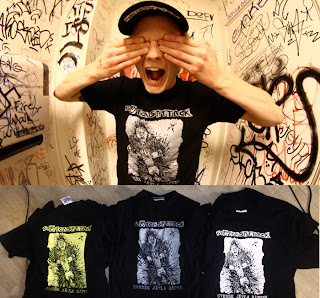 Soundtrack: Institution
Posted by D-takt & Råpunk at 1:59 AM No comments: 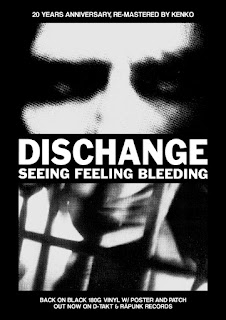 I've been asking Jallo for years to re-release this masterpiece, and this summer it was 20 years ago it was recorded so I thought I should give it one last shot. Believe it or not, I finally got the ok to do it. This record has really meant alot to me and the way I make riffs/music so I can not describe the happiness I feel to present this re-release on D&R. It's most definitely a most have in every punx vinyl collection. 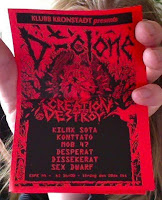 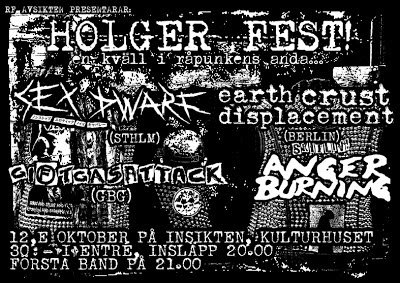