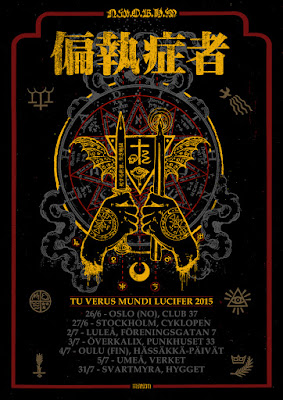 Vi ses i sommar! Design by Jonas A. Holmberg.

Closed for the summerholidays!

Finally catching up with the present! No unanswered emails and all paid orders sent away. I will take the summer off from the 1st of July and until the middle of August. Until then, I really hope that we have received our new releases who's been at the pressing plant for a few months now.
I will certainly be checking my mail sometime now and then during the summer, so it's obviously okey to send your emails and orders, but be prepared that you may have to wait for a response. But it's nothing new. Haha. But it's still a week left until we're closed, which means there's still time to make your holiday-orders.

Punk is love 'cover of the month', the shirt edition! 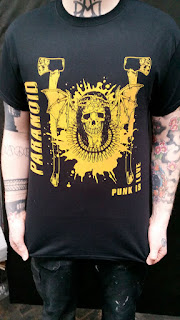 We printed an exclusive shirt (Pisschrist rip off) and sent to Yeap as a gift for the help with mixing the "Punk is love" cover song. To cover the screening + postage costs CrashThePoseUk / No Rules made a super short run which they sell via their web shop. Click the links. Other great looking shirts available. Have a look!

This design will definitely never be printed again and can only be bought through CTPUK. We don't have any for sale. Yellow/orange print on black Gildan heavy t-shirt.


Then we are halfway through this never ending project. It feels like we literally lived in the studio the past months, and if I'll be honest, I'm pretty tired of it. Not on the project as such, but the lack of time to do something else. Like rehearse our own stuff, or to play more live for that matter. But after all, I still think it is worthwhile to explore other band's songs and studying their methods and patterns. It definitely gives more than it costs.
We feel that we need a well-deserved vacation for the summer. Therefore, we've recorded the songs for July and August already. Now you don't need to wait longer than until August to get to know and hear what Totalitär song we picked. Well, enough about that now and let's get back to the topic, and the story behind the choice of this month cover.

Already in September 2014, I e-mailed Emil and Henrik and suggested that we should record "Krossad Dröm" by Acursed. I asked them also to take a closer look to Martyrdöd's first self titled album. Basically speaking, we could've recorded a song by Martyrdöd as well since both bands have been important for us. Although it may not be heard, I try to always have it with me somewhere in the background. It's mainly the darkness, a societal disdain and a reality that they write about that I can relate to that catch my interest. In fact, for both bands. They write about a dark, political, anguished reality that perhaps not all people can identify with. There are few bands that manage to capture that living and real atmosphere on a recording as both Acursed and Martyrdöd does.
Many punk bands have been influenced by their songs and albums, myself included, and made unsuccessful attempts to imitate and copy their style. Perhaps myself included again, I leave it to others to decide. But you can not write about a life they themselves never experienced in a credible way. It only becomes contrived and embarrassing for those who actually living it. The lyrics only becomes empty and superficial of fictional fates and if you can't stand up for what you are writing about. I mean, practice what you preach. That's usually what most of the bands they've bred have in common and falls on.

Acursed are a band that many people like, but very few talk about. In a way, one can almost say that they are invisible, but still not. It feels like they often end up in the shadows of other, more predictable (also yet more active) bands. They make themselves unavailable without actually themselves might have done it as a conscious choice. If you understand what I mean? I would not call Acursed an underrated band, but I don't think that they get, or have gotten, the attention and credit they really deserve. And that's one of many reasons why we chose Acursed in the end.

My first contact with Acursed was the Mcd "A Facist State… In Disguise". I really liked the "professional" sound (compared to many other things I was listening to at the time), the riffs and especially the raw vocals. Some years later the split LP with Fallout, where "Krossad Dröm" is on, was released. I lived in Umeå at that time and I remember I was listening to the opening track at least a dozen times before my roommate knocked on the door and asked if I had a jumping vinyl needle before I continued listened to the rest of the songs. Haha. I guess that all covers we have done and will do have that in common. That you can listen to them over and over again without getting tired of them.

One of Emil's greatest desires was that we would play a Nasum cover. We had actually decided that we would record "Corrosion" from "Human 2.0" as our cover in June. We debated back and forth for a while about potential Nasum songs, but eventually chose "Corrosion". Henrik did his very best to hear/learn all the riffs, but it was easier said than done. I emailed Jon (bass player in Nasum) and asked if he wanted to assist and help us with tablatures or something. He responded later the very same day: "Sure, I'll show you the riffs but only IRL. It's NOT like it "sounds" on the record".

There was only one problem with that, Jon lives in Stockholm while we live in the northern parts of Sweden. It's +6 hours drive (one way!). Luckily, I had a gig booked in Stockholm three weeks later, so me and Jon booked a date. Barely a week later I emailed cancellation.
We had started to rehearse the song but it was too complicated for us, and it felt frustrating and hopeless. We even watched live clips on the internet trying to figure out roughly how the hell they were playing. We knew almost immediately that there was no way that we would be able to make a fair version. Might as well realize and admit our musical/instrumental limits, which we also did. It felt really sad to have to deselect a song with a band that we really wanted to do a cover on. Total disappointment, but what could we do? To make a simpler and poorer cover version was just not an option.

I told Jon (who also happens to play guitar in Acursed) about our defeat, but also about our backup plan, and we decided to still meet when I was in Stockholm.
While the rest of my band started with the sound check, Jon and I were backstage with an electric guitar and a pen and paper. At the same time some idiot did burglaries in our tour bus and stole my backpack as you may have heard or read about. So I where robbed of all my belongings that I had with me on the tour while I learned how to play this song properly. True story.

It's the first time I'm nervous about what the band really think about, and like, our version. It's most probably that Acursed are good friends to us. I don't think I ever told any of them how much their songs really meant to me. For it has. The same goes for Martyrdöd. I hope they at least see this cover as a small proof of my and Paranoid's appreciation of their music.

The production came out not as raw and noisy than we normally have. But I think it fits considering that the song is very melodious. Kenko has done an incredibly great mixing/mastering job again, and we couldn't be more pleased.

Last but not least, we can proudly announce that Kristofer (vocalist of Acursed), joins us on the choruses. He does a brilliant effort, even though it's the first time he screams in several years. We are very grateful and glad that both Jon and Kristofer took the time and helped us and because they were so committed. End of story...and end of ass-licking! Play loud.
Posted by D-takt & Råpunk at 1:55 AM No comments: