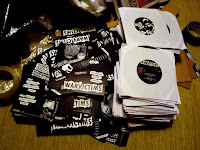 We never thought that this day would come, but boys and girls, today is the day!

The long gone last recording "Thrashpunk Terror Rampage" with the true Warvictims is finally out!

This record have been at the pressing plant for over a year(?). The box was pretty beaten up so some of the corners looks like shit. Comes with no outer plastic bags either.

This is by far the rawest version of Warvictims. It even sounded better then I could remember. Per played the bass on this recording so expect more "rainy-style" then before as well.