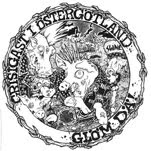 I was most definitely surprised when this little bad boy dropped down the mailbox a couple of weeks ago. I’ve really been longing for it, but I honestly haven’t had the meager amount of four euros to actually afford purchasing it. So imagine my joy when I received it as a promo instead! I’ve heard lots of previews, and it feels like Glöm Dä is the new rave in the Swedish hardcorepunk scene, so I had some humongous hopes for the vinyl to kick some serious arse.
And by gosh, they surely didn’t disappoint. They start off raging right from the get go. The d-beat hits you like a ten ton hammer, and their mix of American, Scandinavian, Asian, whatever crustcore really comes off as nothing but picture perfect. One moment I get some State of Fear vibes, suddenly it’s a short spur of Disclose, the next moment I feel some Totalitär to nestle its way into their sound, and for a while I even think of Snifter. For the opening track, Jobba supa äta skita pissa sova dö, there’s even a slight rockin’ guitar line, getting me thinking of Misery and Extinction of Mankind. Era sopor våran mat has a major hardcore base, but as it gets going I can’t help but to think of Warcollapse. So it’s safe to say there's tons of familiarity when it comes to Grisigast i Östergötland, which also serves as a standing point for the fact that they don’t really bring anything new to the table. And to be perfectly honest I couldn’t care less!
Each song is a complete rager. They whip up a sound that’s both basic and contrived, probably drawing influence from all over the place. It’s ridden with adrenaline, filled with energy, pissed-as-hell and intrusive as a mother… I understand now why everyone’s talking about this young bunch like they’re the new saviours of Swedish crustcore. Sure, the lyrics aren’t exactly mind-blowing, artsy fartsy and thought-inducing; it’s just basic rants about everyday life. Årre’s vocals have really come a long way since his days in Extinguish (the first time I came across his work), and his harsh scream goes utterly well in hand with the deeper, and slightly more grunting, back-ups popping up every now and then. The production is raw, yet highly accessible, and everything just comes together in a merry and wholesome record for the entire family. Now I just need to get ahold of their new 7” and the split with Dörrterror.
/Kristoffer, My Last Chapter
Posted by D-takt & Råpunk at 3:46 AM

Era sopor våran mat has been stuck in my head for awhile it's really catchy. I could image how well this band would be live. nice review by the way.