Trve supporter of Punk and the underground DIY scene! 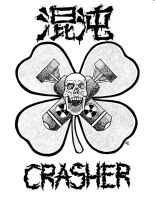 I'm not going to sit here and defend and explain my, or the bands I play in, decisions. No one, except I, the band(s) and the labels involved, have any idea what's been said and agreed. For all the rest, why bother?

Just because I and others appear to believe your bullshit, doesn't mean we're as stupid as you think we are. We're just laughing inside and waiting to see what else you come up with. FUCK OFF!

I have and will always support the DIY punk scene, no question about it! If you think otherwise you're either ignorant or extremely stupid.
Gaki (Konton Crasher) is still a great friend of mine and there are no words to describe my gratitude for all he's done for me in private, but also for 偏執症者 (Paranoid). I will always support Gaki and his label, and the fact is that we will work together again in the near future.

It's true that we will re-release "Satyagraha" on Southern Lord for our upcoming US (west coast) tour. Which actually was the origin plan. Konton Crasher still have copies left of the first press (gatefold version w/ free cd included!) that you can and should buy HERE at firsthand unless you already got it.

My passion for punk, independency, diy and the underground scene have always been my greatest inspiration. Its a big part of my life and identity, and thats the main reason why I still running D&R. Even do it requires more time and money than I actually really have. Död åt vek punk!

Its not the first time that you work with Southern Lord. Right? In my opinion you are still the same person you've always been. Polite on emails, but at times slow ;o) Its no ones business what you do and dont. I would say fuck 'em! I already bought the album from Konton Crasher. One of the best albums of 2015.

DEREK: We're still the same dedicated and hard working band that we always been. There is nothing that will change that. We decide with whom we want to work with and when. The beauty and freedom of DIY. Fuck a record deal! Slow = gulity! Thanks.