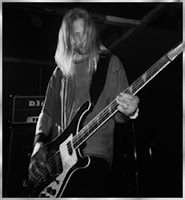 Disfear bass player and long-time member Henrik Frykman has passed away after a long battle with cancer. The band, Björn Pettersson, Marcus Andersson, Ulf Cederlund and Tomas Lindberg, has issued the following statement: "It is with heavy hearts we inform you that on Friday the 25th of March Henrik Frykman passed away in his home after a long battle with cancer. Henrik will be greatly missed by family and friends."

Frykman joined Anti-Bofors in 1990 and in 1991 the band underwent a name change to Disfear. The band has morphed and evolved over the past 20 years into an internationally recognized and respected band. Disfear has toured the world over and released a number of acclaimed full-length albums including 2008's Live The Storm.


I did't know Frykman in person but we had some mail contact during the Skitliv! era and a short while after. I mailed him once a while asking for permission to re-release the Anti Bofors 7", he always answered "It will never happen!". I also bought/sold/traded stuff with him back in the days. It was Sid Vicious and Disfear (indirect Frykman) that made me want to learn to play bass. One of the first song I ever learned was "Undergång". And I still listen to the early Disfear records once a week. Disfear, Dischange and Disclose is and has always been three very important bands/inspirations for me when am making songs. It's a great lost and I share the grief with his family and friends. Frykman will always live through my speakers!
Posted by D-takt & Råpunk at 12:39 AM

he will be missed. RIP Henrik.