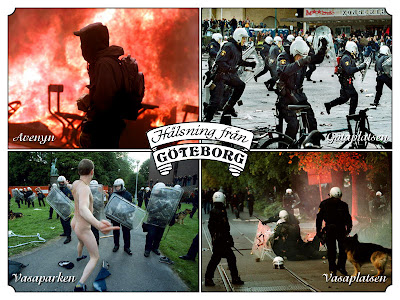 A Swedish public television program called Uppdrag Granskning (in swedish) have made an episode about "Göteborgskravallerna", ten years later to look back on what actually happened. Back in 2001 I sat at home and followed the spectacle through newspapers and television and it makes me just as angry today as ten years ago to see police forces exert more force than necessity requires. A few years after the riots did Lukas Moodysson and Stefan Jarl a documentary called "Terroristerna" that I really can recommend. You can find the entire film in nine parts on YouTube with English subtitles, part 1/9 below. Click all the links for further info.