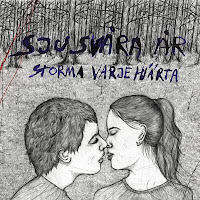 I got a few copies of Sju Svåra År's 12" if any one is interested. Comes with a backpath. 90sek + postage.

Sju Svåra år (Seven hard years) were formed in Stockholm in 2001 on the ashes of unfogotten BURNING KITCHEN, but they release their debut record just now – in 2011. During this decade band was defunct for few years, one of the reasons being its members were active in other Stockholm based bands like WOLFBRIGADE, TO WHAT END?, ABDUCTEE S.D., ASTA KASK. Finall they got their shit together and recorded this totally catchy debut album. Melodic, sometimes nostalgic and than fast and simple, catchy punk rock with Josefin vocal you must remember from Burning Kitchen records. You can listen to this record constantly with the urge to singalong, if it wasn’t sang in Swedish!