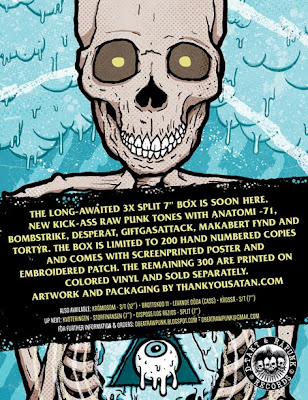 One last chance to pre-order the 3 x split 7" box set that we launched one week ago. We have only about a number of 15-20 boxes left now. Our hope is that we will have all the stuff within two weeks, those who paid before then are not only guaranteed a box, but their boxes will also be sent one day before it is released.
In recent times, many people order but never pay. We always give you two weeks to pay for your order, after that you give us no other choice but to put them up for sale again. Same deal for every one and it's not fair that we holding records to someone who don't want it when people are asking for it. So if this box is sold out after this weekend, which i think it will be, make sure to check this blog in two weeks again.

UPDATE: The boxes are all gone! Sold out!

For the seperate split 7" is the Desperat/Giftgasattack already sold out, but we still have records left of Anatomi -71/Bombstrike and Makabert Fynd/Tortyr. Have a nice weekend!