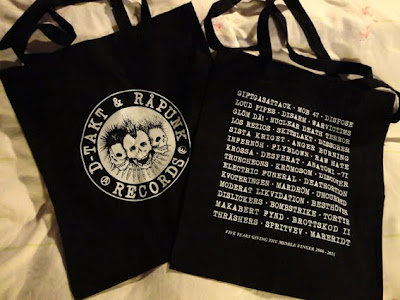 In December 2006 we put out the third issue a fanzine called Skitliv! In that zine we included as a free christmas gift, the first recording ever with Warvictims. It was not only the first Warvictim record but also the first record in the D&R stable.
That was five years ago, time flies. We printed 100 canvas bags with our logo + a band list of all the bands we've worked with so far to celebrate our five year anniversary. These bags was given away and sent to bands we released, labels and distros we worked with + a few dedicated d-beaters who's supported and helped D&R through the years. We had never survived a week if it were not for all of you, so thank you very much!

We now have ONE bag left and we give everyone the same opportunity to buy it. The first who email us will also get it!
Update: GONE!
Posted by D-takt & Råpunk at 4:46 AM