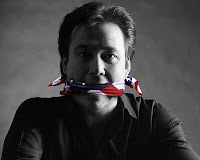 Too tired to do anything, to alert to sleep so I sat in front of the TV, hoping to fall asleep last night. I zapping around in a few minutes in anticipation of Seinfeld would start before I turned on "En komikers död" (American the Bill Hicks story) on Svt2. I've never heard of Bill in the past but the little I saw of his shows were accurate, sometimes very dark and brilliant. He was a sober drunk who's not hypocritical in that he liked magic mushrooms and other drugs. Of course, he died prematurely of cancer. Such a waste.

I really like this quote from one of his acts about flags and freedom:
"Our emotions are running wild and our minds have stopped man. That flag burning thing, god did that bring up some retarded emotions... The flag! The flag! They said we can burn the flag!!! they didn't say that, they said if a guy burns a flag he probably doesn't have to go to jail... For a fucking year! People going... "Hey buddy, let me tell you something... My daddy died for that flag!" Really? I bought mine, you know they sell them in K-mart, three bucks. "He died in the Korean war for that flag." Well want a coincidence! Mine was made in Korea! He didn't die for a fucking flag, it's just a piece of cloth, he died for what the flag represents and that is the freedom To Burn The Fucking Flag!"

Anyone who knows where I can find out more about Bill Hicks? Shows, movies, books? If you, like me, didn't know about Bill, wanna get a good laugh or just want to know more then I can highly recommend this documentary to begin with.
Posted by D-takt & Råpunk at 2:03 AM