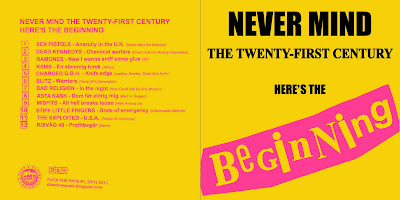 A lot of people asked me over the years how I got in touch with punk for the first time and what bands I started listening to. So here you are, for the first time, I have compiled a collection of some of my first favorite bands/songs from back in the days when it all started. As you can imagine, it was impossible to pick all the songs that I wanted to, this is only a small selection. There is probably no immediate surprises or songs you never heard before, but this was at least the beginning for me.
The year was 1992 and I had listened to hard rock (Iron Maiden, Kiss, W.A.S.P, Twisted Sister, Ac/Dc, Metallica and more...) since kindergarten, so I already had a good foundation. The first contact I had with punk music and punks was via a friend's older brother and his wild smoking/drinking skateboarding friends. He lent me three LPs that changed my life forever. It was the "Sex Pistols - Never Mind the Bollocks", "Ramones - Loco Live" and "KSMB - Aktion".
I was hooked after that and had a constant craving for more. Every now and then I went to our local record stores Guntans, Skivbörsen and Skivhörnan where I spent a lot of hours, maybe days, listened and bought new records right up until all three stores closed down. This is my life, this is the only thing I know...

* SEX PISTOLS; the first punk band I ever heard and it made a huge impression on me, although I think that they had the ugliest cover I've ever seen. At least compared to my old records such as Iron Maiden and Kiss. Sid Vicious was my biggest idol for several years and I had the same black haircut, leather jacket and a necklace that he had. Still think that this is one of the best punk/rock albums ever.
* DEAD KENNEDYS; they had a different and unique sound/style and I loved Jello Biafra's vocals. For some reason I imagined that he was mentally ill. Haha.
* RAMONES; kings of "4-takt" with countless hits. Ramones is the living proof that simple three chord songs are the best. "Now I want to sniff some glue" was The first song I ever learned to play on bass. A really hard song to learn, especially on bass I tell you.
* KSMB; the first punk band that I heard singing in swedish. I had only listened to swedish pop and Magnus Uggla previously. KSMB was so much rawer and they had lyrics I could relate to. The song "En slemmig torsk" stand out among their other songs. It was hard to decide since they have so many great songs, but this song spun a few extra rounds on my stereo when I was 13 years old.
* CHARGED G.B.H; it was by a local band named Ultima Fule I drew the attention of G.B.H. They did a cover of "Knife Edge" and I thought it was so damn hard. The singer Reine later introduced me to many other great bands, not just G.B.H. and not only punk music.
* BLITZ; a little side-track was the oi punk that came and went during the early years. I have alot of other favourites like Infa-Riot, Business and Attak but it was always Blitz that made me want to go out and fight. Someone's gonna die tonight!
* BAD RELIGION; I fell in love with their logo long before I even heard the band. I was often questioned by teachers and grown-ups when I had my Bad Religion t-shirt. The early stuff with BR is the best, but I also think that both "Suffer" and "Against The Grain" are two really good albums too.
* ASTA KASK; next to Mob 47 Asta Kask have been one of the most influential swedish band on me. I thought they played extremely fast and their lyrics spoke directly to me in some way. They just had that perfect sound, hard to describe, but I loved it. The swedish language made ​​it easier to sing along and it affected more than the english bands. I have probably played covers of most of their songs during my youth. To see Asta Kask live in 2003 was absolutely wonderful since they have always been close to my heart.
* MISFITS; it was the same story as with Bad Religion, I had seen the Misfits skull months before I heard the music. My friend's brother had such a sticker on his skateboard, so I knew it would be hard, and I was not disappointed. They looked so dangerous on the band photos and I had the same hairstyle as them over a period. Misfits grew over the years and by that I mean that their songs from the 80's is the best and that it only got better the older I became.
* STIFF LITTLE FINGERS; without any expectations I borrowed "Inflammable material" from a good friend around -94. He was very fond of his new discovery and thought I should give them a listen. This is by far S.L.F best album and it's a great record to bring on tour. The last time we had it in the car stereo was on our Japanese tour.
* THE EXPLOITED; I'm probably one of few that really mean it when I say that I think that Exploited is great. It was really hard just to pick one song, they have so many, like all the other bands. Haha. I had plans to tattoo the Exploited skull when I turned 18, but one of my best friends did it before me. Maybe it was for the best cause I had not wanted to have that tattoo today. It was also because of Wattie I cut my first mohawk. Another memory I have is when my mother had been in Stockholm for the weekend and came home with an Exploited shirt. I was happy for months, imagine what little was required at the time.
* RIXVÄG 40; a local band that I guess that many of you have not heard before. It was difficult to select between them and Sector Sexs (also a local band) since they are at least as good, if not even better. I really looked up to both bands and it was them who made ​​me want to start playing music from the very beginning. Rixväg 40 was the first punk band I saw live and that's the main reason why I picked them. They played at a youth center (in exactly the same youth center where I only one year later took my first chords) where they had 13 years age limit and I was only 12. My older friends kindly opened the back door for me. I managed to see two songs before the working staff threw me out, and so it continued through the whole concert. That night I fell asleep with the world's biggest smile on my face, I had a weird feeling throughout my body, a feeling I never had before. I was in love...in love with punk. Such a cheesy ending...