The 7" has finally hit the streets of Czech Republic. We will get our cut in 1-2 weeks, hopefully in time for the unofficial releaseparty in Östersund 17/2. It's released by Phobia Records, 500 copies (50 limited edition ). We will not get any extra ltd copies, so you have to order it direct from Phobia. Just want a plain and simple 7"? Mail us. 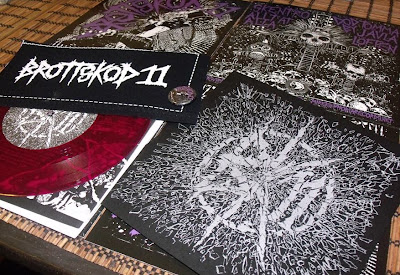 "Brand new seveninch coming out from Phobia Records. This time we´re proud to release 4 songs 7“EP from Swedish crust zombies BROTTSKOD 11 with Jocke D-Takt from Warvictims, Desperat or Electric Funeral on bass. Recorded in Empire Studio (September 2011) and mixed by Pontus Lindroth. You´ll get high quality crust / d-beat in the vein of Skitsystem, Warvictims or Dödsdömd. The amazing cover art is done by Chris Eliminate. One song from this 7“EP you can listen on our website. One-time press of 500 copies on purple vinyl. There´s also limited edition of 54 copies with screenprinted handnumbered special covers + patch + button".
Posted by D-takt & Råpunk at 1:25 AM