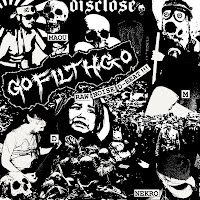 2010:
- Last year was a year of work for Go Filth Go. Apart from the lots of rehearsals we did, we were working also on future releases. Finally, our debut tape was released just after summer, creating a feeling of satisfaction and excitement to us! This material was recorded and waited almost a year to be released. After releasing the tape, an idea came to mind. Kind of crazy for the givens of our shithole country Greece. The idea was to tour Europe. We stared talking with people, talking it out together and after some months it was a fact! We are going on a tour! Our excitement and anticipation for this can't be described in words! Another good thing about last year was that in the beginning of the year we released, with my black metal band Black Trinity, our debut cd that we've been working on for 5 years! It finally saw the light of day and we're pretty satisfied with this dark spawn of ours. On a personal level 2010 was a relatively good year. Had its ups and downs of course, but ok in general. To be honest this year wasn't that spectacular apart from music. And I kind of have the feeling that this year was like the calm before the storm. And by that I mean...

2011:
- ...I mean that it seems 2011 will be a year of crucial decisions. Key decisions about the future. But anyway... we'll have to wait and see about that.
As far as Go Filth Go is concerned, this year seems to be a hell of a year. First of all, a totally great thing about it is that it starts off with many releases for GFG: two split 7", one with Besthöven and one with Electric Funeral. Really really excited for both of them. Also we take part in two comps. One is a greek punk benefit compilation LP and the other a 4-way split 7" called "Victims" alongside Electric Funeral, Exithippies and Filth Militia. That is some cool shit! And to make it even better, there are also some more proposals for future releases! Also, the tour is happening in Arpil. From the 15th to the 30th through 11 countries in Europe. Really hope it turns out ok, meet cool people, have lots of fun and mosh all together with d-beat raw punk!!!

- About records... I can't stop listening to the s/t LP of Herätys!!! Full of raw power and energy! It's all about raw punk! Also "Noise Hero" by Giftgasattack! Absolutely great record! Noise on till deafness!